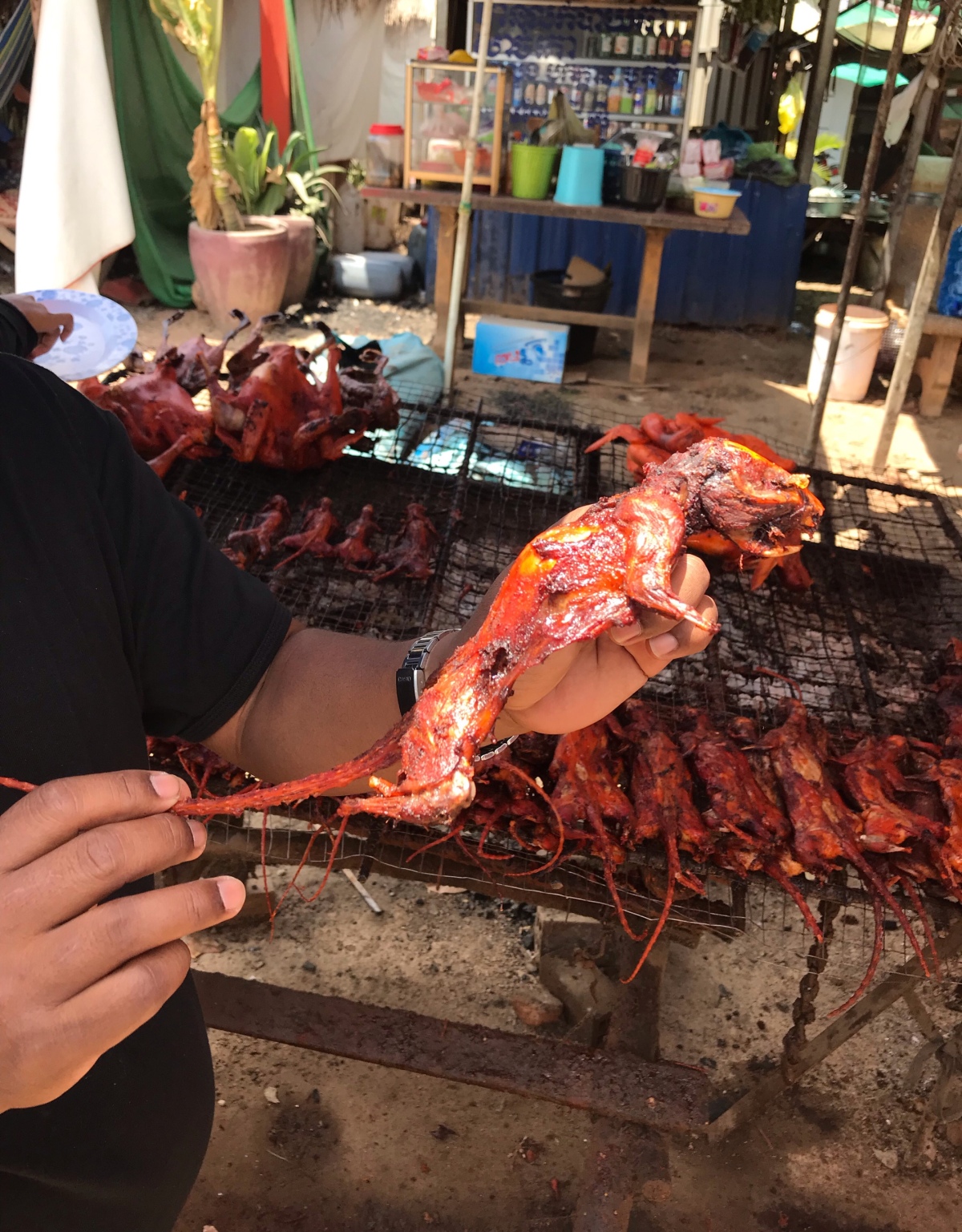 Our morning agenda consisted of a Soksabike half day bike adventure exploring authentic cottage industries throughout the Cambodian countryside around Battambang. While our Intrepid group and Sareth would exercise all morning cycling 22 km in over 32 degree humid heat…I would play the role of the trusty mascot who would be in charge of purses and backpacks and yell encouragements from my position in the back of a covered Tuk Tuk! Ahhh….Those darn knees of mine!

Although this event was included in our Intrepid tour, it can be booked with Soksabike for $27 US/person. This collage depicts some of our sights and experiences today in Cambodia. 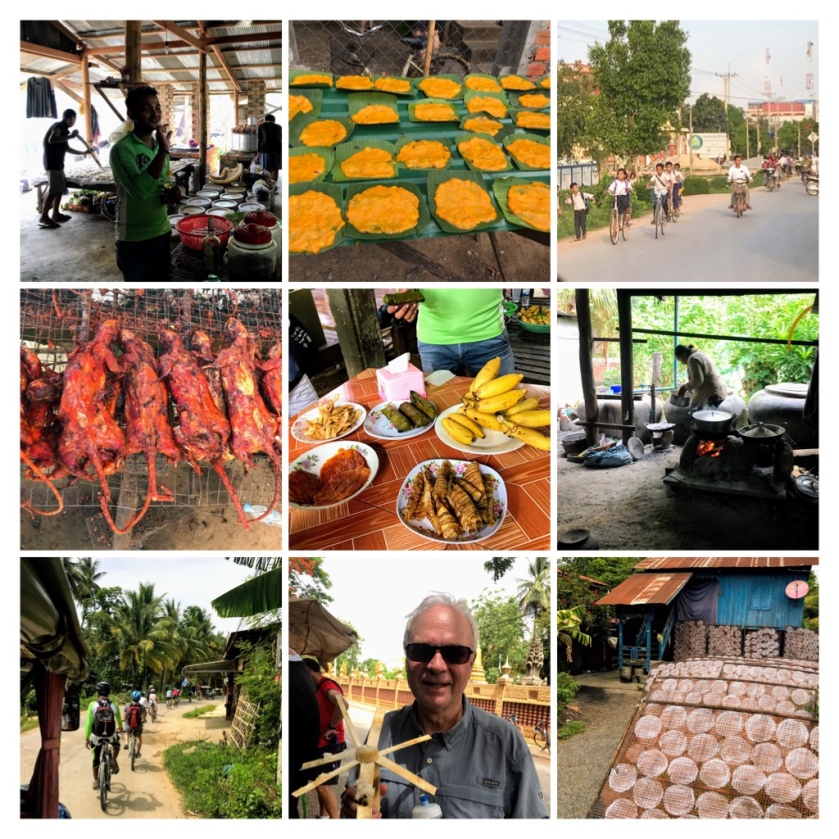 During the Soksabike tour we stopped at several private homes to observe and learn how various food products were harvested and the locations in which they were created! This video represents our morning adventure from orientation at the bicycle rental through the first two countryside visits.

Please note the variety of housing as we made our way through the lanes and back roads checking out cottage industries off the beaten path of Battambang.  70% of Cambodian population lives in rural locations. We were so appreciative to have the opportunity to learn how products were made in traditional ways by local Khmer and understand how these gentle people lived, worked and survived.

At the first location we learned about creating rice paper. Although most of the people we visited did not seem to understand English, our tour guide explained about their lifestyle and what was involved to create their product.

We walked past the racks of drying rice paper into the production area/home. Water is collected in huge ceramic pots at the rear of the home. Inside the home the men sleep on mats beside the fire, motorcycle, and drying racks. We were informed it is safer for the women to sleep upstairs. This family unit worked from Dawn to Dusk every day creating rice paper just to make ends meet. The elderly were cared for by the family. While we were at this location, a monk (in orange robes) arrived to collect contributions of food or money. The lady offered him coins from her meager supply.

At the second location we learned the process involved to make dried mango and bananas. Wooden boards supported multiple quantities of bright orange mango which rested on leaves while drying in the sun. Flies were plentiful buzzing around the sweet, sticky substances. There were also long poles drying bananas. In the yard we also observed long bamboo poles with baskets on the ends resting against a fence.

Inside the home a table was set with samples of fruit for us to try. While our guide explained the process for drying fruit, the women sat on the floor in the background peeling fruit. There were also some older men baring war wounds and scars who sat silently. When we departed into the yard one of these men demonstrated the long poles with baskets which he had created to assist removing fruit from tall trees. He also demonstrated the stick marionettes he makes and was delighted when Ecaterina and I purchased one.

Resuming our tour, we noticed that children were quick to wave but adults tended to be serious and sometimes seemed uncomfortable towards us.

The second video reflects the continuation of our cycling tour and introduction to more Khmer traditional foods and drinks including bamboo sticky rice sold in long bamboo tubes and another location producing rice wine.

We have seen several rice wine distilleries during our travels though Asia, but this was by far the cleanest and most modern facility I have witnessed. As usual, no rice wine facility is complete without at least one huge poisonous snake sharing its poison in a large clear jug of rice wine!

As we passed a Wat temple three very serious young boys were exiting–possibly studying there?

Following the cycling tour we checked out of the “Classy Hotel” in Battambang and headed to Siem Reap. 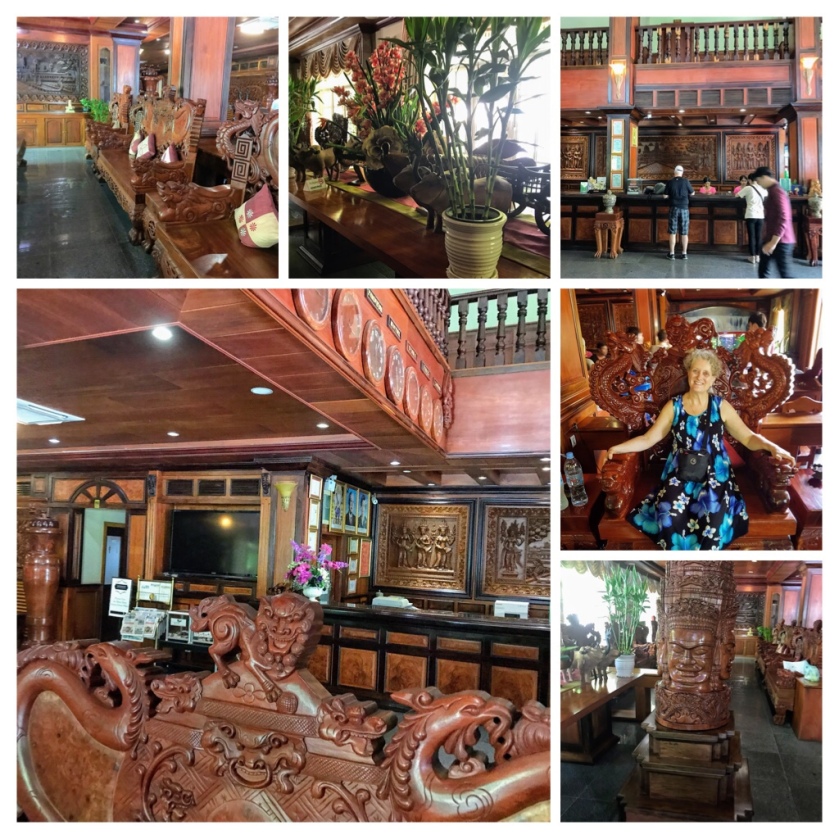 Au revoir Battambang. Although it is the second largest city located in northwestern Cambodia we spent very little time here. 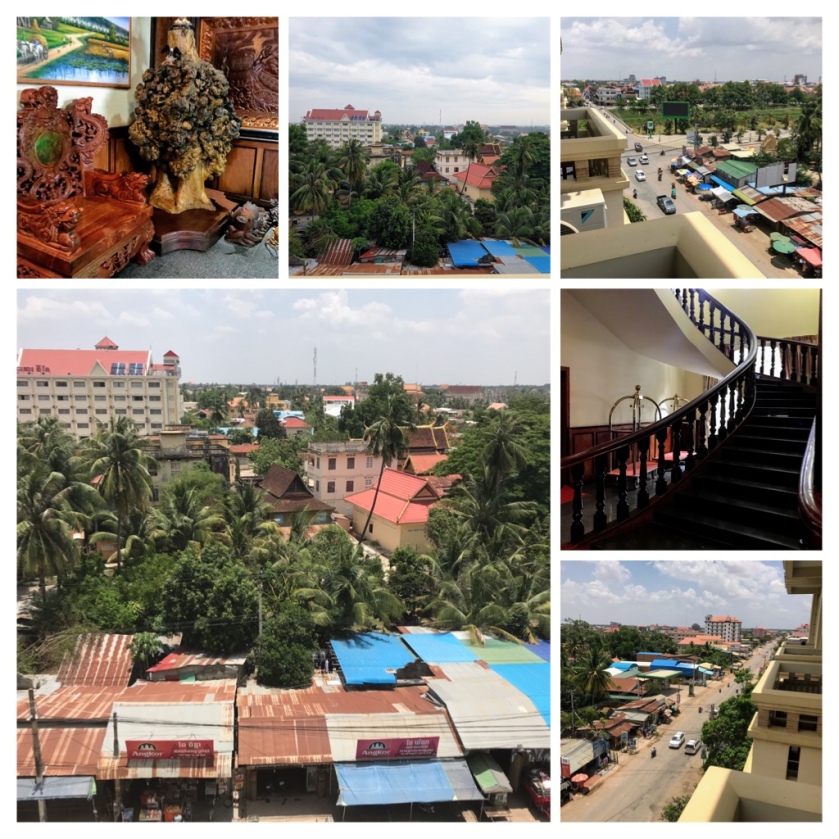 En route to Siem Reap we stopped at Sareth’s favorite roadside stop at O Taki. Strettarea to sample Khmer BBQ foods (well…some tried). My husband decided to sample some rat, but I preferred to sample a very chewy frog!

Roads were packed with bicycles through Banteay Meanchey as school children clad in white shirts and navy pants/skirts exited school grounds on mass for the day. 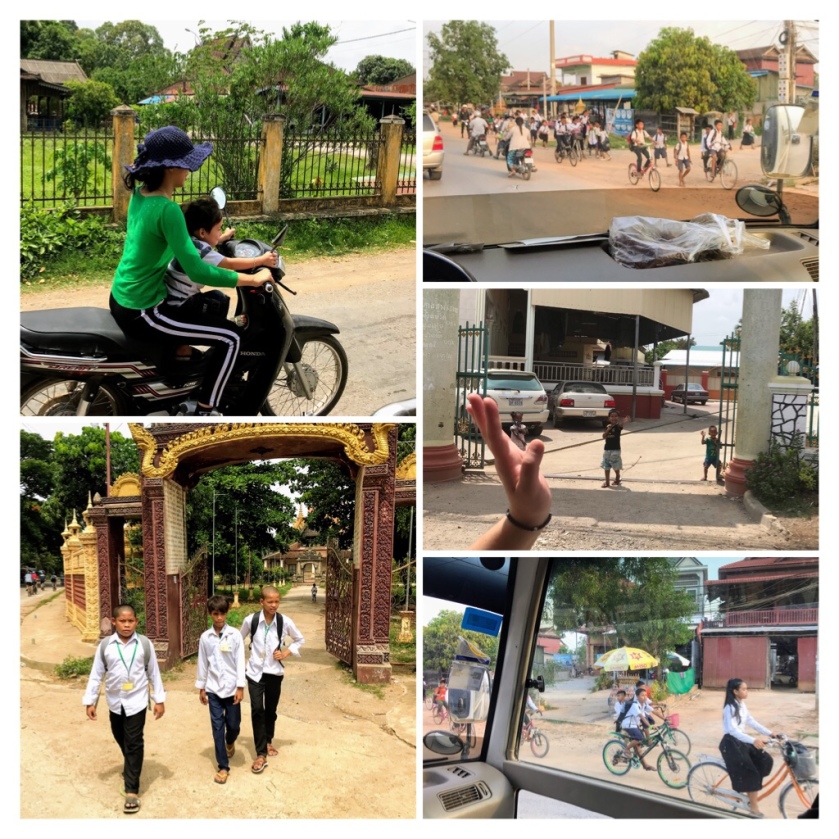 In the collage above… the top right photo is an example of take out Khmer style! There are several BBQ rats in the white bag on the dashboard.

During the 3 + hour trip from Battambang to Siem Reap we encountered more road upgrades and construction. We were informed most of the funding for these infrastructure upgrades is coming from either China or Japan.

This final video illustrates the BBQ Khmer foods we sampled and what traveling on highways looks like in Cambodia.

Road safety does not seem to be a priority here as people ride in the backs of trucks, on the tops of loaded vehicles, or pass on the right or left! We witnessed 2 lane highways regularly being utilized as 3 lane roads as vehicles manoeuvred between the center while vehicles were occupying both lanes of the highway!

Once arriving at our destination of Siem Reap many of us took advantage of the hotel’s pool for a much needed break to relax and unwind! We are based at Dinata Boutique Hotel for the next 3 nights.

What is retirement anyway?

Feb 2017, I retired after teaching for 34 years in Northern Vancouver Island.  Teaching is not just a job, a hobby, a career….It is a way of life!

Another consecutive life change was to move from my home town of Port Hardy to North Nanaimo.

I met interesting people at the pool–young mothers, people off having physio, and lots of retired individuals with fascinating stories. I got involved knitting squares for Blankets for Canada. I worked with my husband renovating our house. We traveled to Australia for 6 weeks.

Everything seems idyllic  doesn’t it? But…the feelings of “what now?” and the thirst to reconnect with children, colleagues, and make a difference in our world kept resonating in my mind and heart.

Then….A 6 month job posting appeared in my email that “called my name”.  The excitement and thirst for adventure and new challenges to make a difference won over. After lengthy discussions with my supportive husband… I applied for, and was offered the job in Nechako Lakes.

During  the 2018-2019 school year I was busy evolving 2 Elementary School Libraries into Learning Commons for 7 1/2 months in Burns Lake and my husband and I also traveled through Asia for 6 weeks.

What happens next? I’ll let you know when it unfolds…