Another day/night packed with adventure, care of Intrepid tours. Our group of 12 plus our leader, Jay, will be departing from Hanoi in Northern Vietnam and arriving in Hue, Central Vietnam, via Vietnam railways overnight train! Oi, troi oi! This would be an experience we wouldn’t soon forget!

During our bus trip we passed interesting architecture–influenced by previous historical association with France. 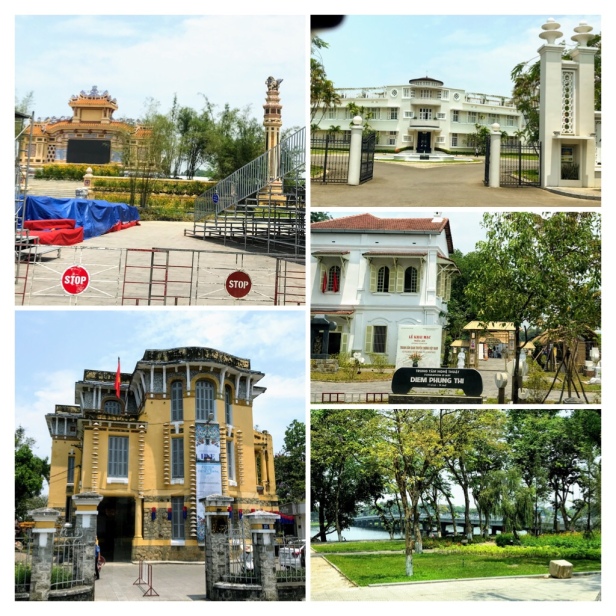 We also passed several public schools where uniforms were worn by students and these fit youngsters did not ride buses, instead as they exited the school most jumped on bicycles as their means of transport home.

Around noon we re-connected with our luggage, refreshed and relaxed at Hong Ngoc Cochinchine Hotel in Hanoi in preparation for the overnight train experience. Many of our group decided to have massages and/or take an optional Hanoi Street Food tour. In Hanoi’s Old Quarter there is much to explore and extensive food options.

A popular market in the Old Quarter of Hanoi is Dong Xuan Market. It is a fascinating gathering place for locals 900m north of Hoan Kiem Lake. Thanks for these awesome pictures Jess! 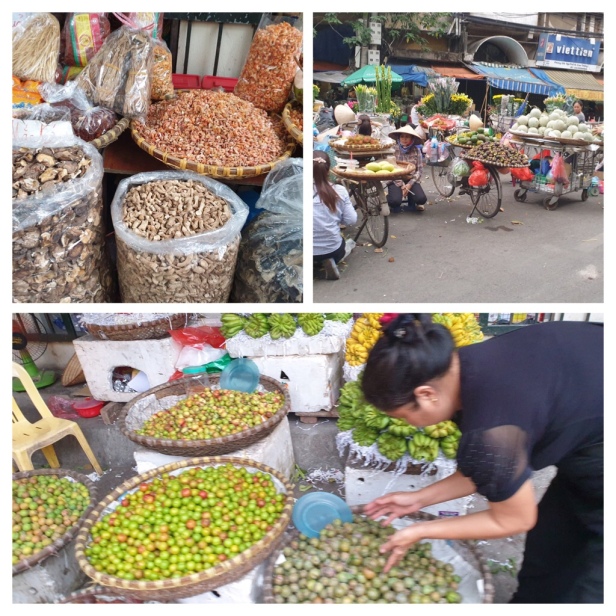 While about half of our group attended the Hanoi Street Food Tour, others had done this awesome tour earlier, so decided to visit another popular location for dinner–Hanoi Food Culture. It was relatively pricey and we noticed that most of the clientele were foreigners, but the food was lovely. 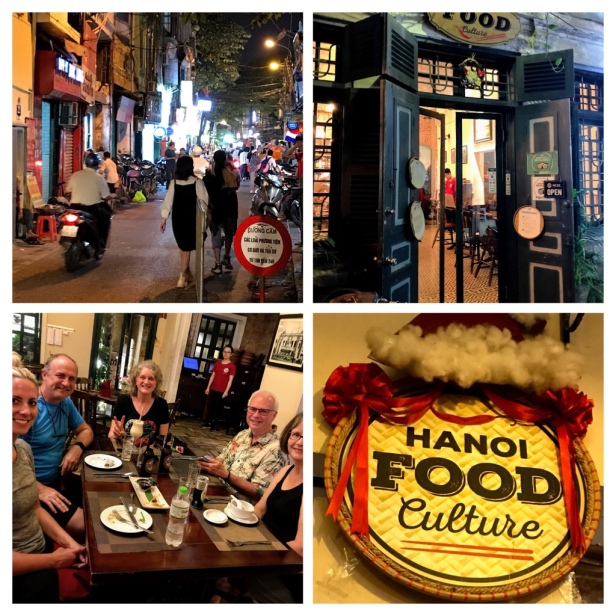 We had been advised to stock up on food and drinks for the overnight train trip and avoid eating/drinking from the train vendors. We picked up some supplies from the extensive options in our area. The honking from vehicles and activity around here is quite intense until about 11:00 or midnight, then it slows down for about 6 hours during the night. 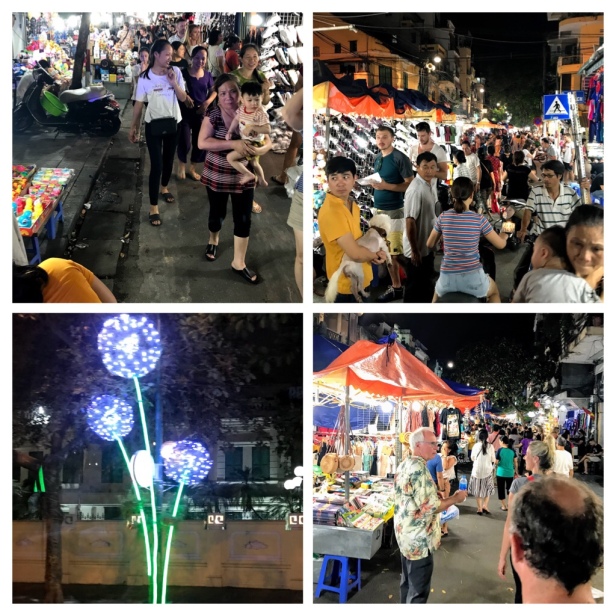 We headed off about 9:00 p.m. to Ga Hanoi Train Station. Jay was busy during the day fixing our reservations because the train company had split up our tour group into different carriages with other tour groups. He spent multiple hours at the train station until our group of 12 were placed in 3 carriages together. Thanks Jay!

Trains classified as SE are the best quality train option apparently. There are 4 main ticket classes: hard seat, soft seat, hard sleeper, and soft sleeper. Only the express trains offer air conditioning. The trip from Hanoi to Hue via express trains takes approximately 13 1/2 hours leaving about 9:30 p.m. and arriving about 11:00 a.m. There are 4  narrow sleeping bunks in each carriage (each supplied with a pillow and a sheet), a tiny table, a narrow aisle, and a door. This is an example of the soft sleeper (highest level) carriage with 4 of our lovely Intrepid group–At the start of the adventure! 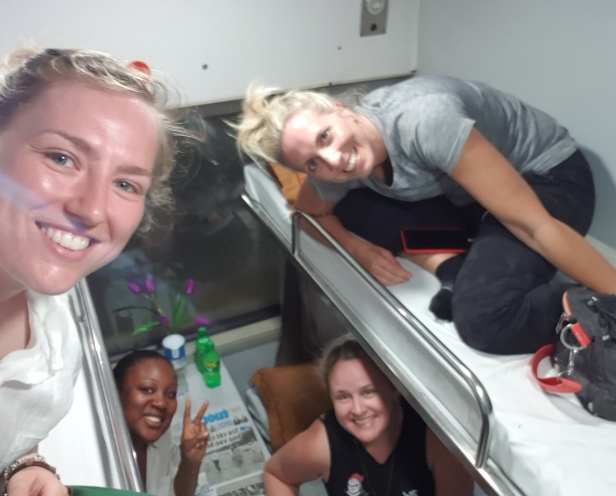 The toilets (which left much to be desired) were located at the end of each carriage. We used them as little as possible! Our carriage was ‘air conditioned’ (or so we were told)…

Here is a short video of our overnight train experience from Hanoi to Hue. You can’t hear the Foreigner child who was screaming for hours. There is a photo near the middle of the video showing several people standing in the hall by the open windows. The air conditioning was either freezing cold or blowing heat during the night. We gathered in the hall to try and breathe and locate somebody to fix the extreme heat variance problem.

We located 2 females working for the train company. One was sleeping on the floor near the toilets and the other one was throwing up by a carriage divider. We were all pretty excited when we reached our destination and disembarked the train! Welcome to Hue!

Hue is pronounced ‘hway’ and the city is located on the Perfume River. This city was the Imperial capital of the Nguyen emperors. Sadly, many of the buildings were damaged and destroyed by bombs during the Vietnam war (which they call the American war). However, we were to discover there is much to see and experience in this fascinating city. 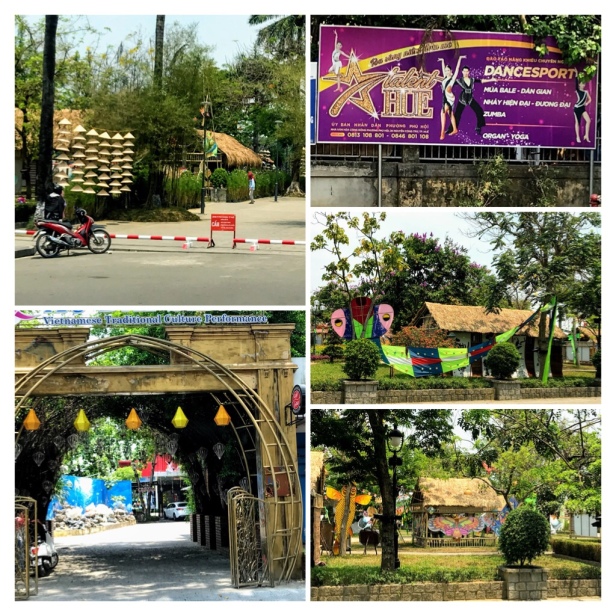 Our Hotel was not ready when we arrived, so we headed to a restaurant beside the Perfume river for lunch and karaoke Jay style! Our guide, Jay, is getting married soon and we convinced him to practice the song he plans to sing to his bride. It was very beautiful and touching for us all.

Our base for the next 2 nights is Gold I Hotel in Hue. This is our view of Hue from our hotel room.

We settled into our rooms then headed off to visit the war damaged ruins of the Hue Imperial Citadel complex. The Hue Citadel (Kinh Thanh) was built between 1804 and 1833.

Although war damage is obvious, the Citadel  was heavily fortified with 2 m thick walls which ran 10 km in length. Plus there is a moat and 10 gateways.

We walked around the Imperial Enclosure with locals and other tourists. One focal point is the 9 dynastic urns which are huge bronze urns commissioned by Emperor Minh Mang and cast between 1835 and 1836. They are decorated with landscapes, rivers, flowers and animals. 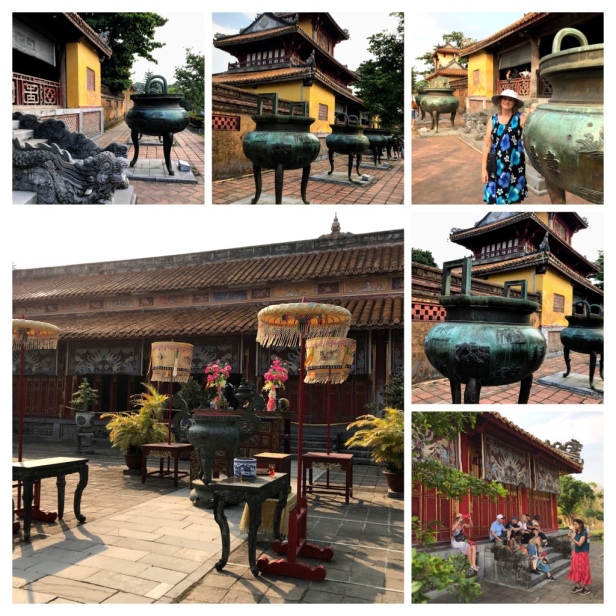 We saw the Thai To Mieu Temple Complex and the Halls of the Mandarins.

After we completed the walking tour of Hue Citadel with Jay, most of our group chose the optional Cyclo Tour around Hue. 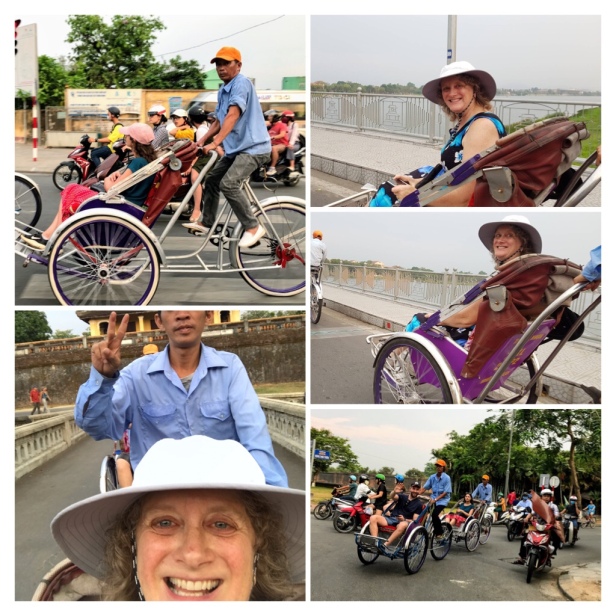 What a fun and relaxing way to get a sense of a community! Each of us sat in our own Cyclo while a male driver behind us peddled the bike. Generally we traveled single file in a long line of 8 cyclists. I feel certain we were quite a spectacle!

We traveled everywhere from major highways to back alleys! Children would run and practice their greetings “hello” and wave when we drove past. We were able to view sites and local spots that we probably would not have known about. I enjoyed the experience so much there is 2 parts to this movie adventure.

Cyclos were tons of fun… but tomorrow we explore Hue on motorcycles!!!