What an incredible day in Chiang Rai 196 km toward north eastern Thailand. We took a tour (over 10 hours in length) from Chiang Mai to Chiang Rai, in 40 degree weather, to view some of the most ornate and creative Asian sculptures and Wats (Buddhist temples) I have seen in my global travels so far! 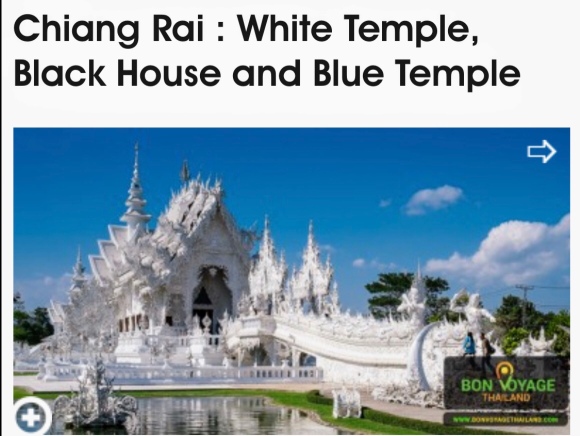 There is much to present in this blog post…

The 4 of us were picked up early 7:30 am from our location beside Wat Suan Dok in a small bus with 8 fellow visitors from Korea, Australia, Switzerland, and Canada. The cost was 900 Thai Baht each for the 12 hour adventure! We were off for a full day of new experiences and site seeing. 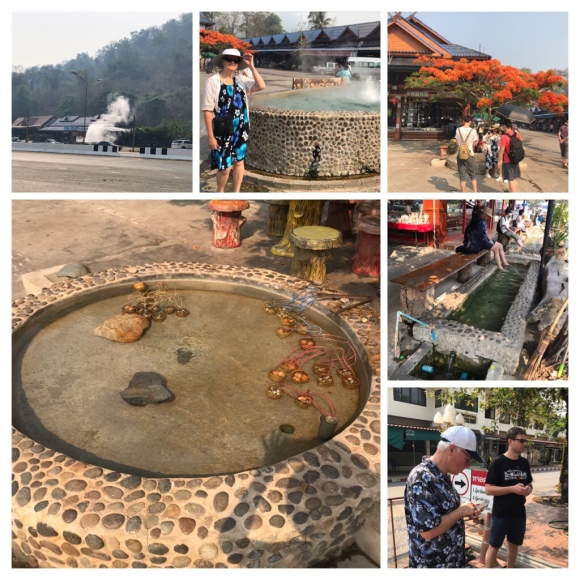 Our first stop after about 3 hours of driving, was at the hot springs at Mae Khachan. There were the usual markets and food vendors, and places to soak your feet in the natural hot springs or cook eggs in the hot springs water. 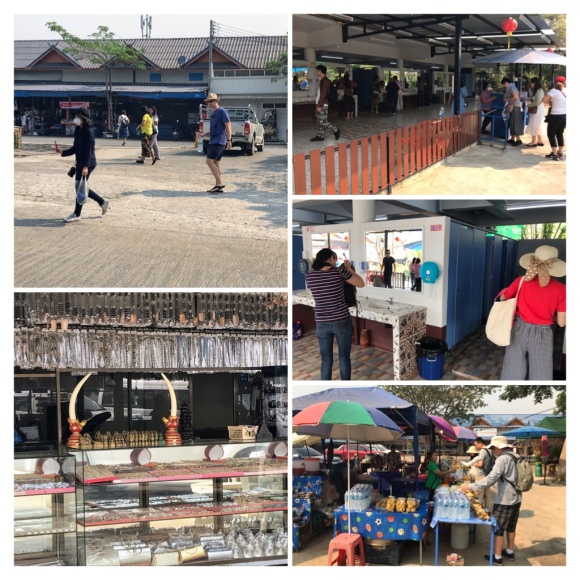 The toilets were 5 or 10 Baht to use, but were clean and even had flush capability and toilet paper! There were some very unusual items for sale in one gift shop including elephant tusks! The air quality was listed as dangerous– due to Thai pollution and extensive burning both garbage and in the jungle areas. Many people wear face masks –including Benz.

Back on the bus to our next location….Wat Rong Khun (the White Temple) is located about 20 km south of Chiang Rai.  Wat Rong Khun is an ornate, intricate white temple adorned with gold and silver. Multiple additional ornate buildings are located throughout the property. The toilet facility is gold and is adorned with beautiful gold statutes in the front garden area. An eating area displays murals dedicated to the life of the previous King of Thailand. There is a fund raising area where you can throw coins into a gold well or pay to hang a silver ornament (with personal message) on the silver ‘trees’. We left a message there.

The sculptures, statues and paintings were  created by the contemporary artist Chalermchai Kositpipat. He opened the breath taking compound in 1997 and it is a major tourist attraction for the Chiang Rai area. The cost for foreigners to enter the White Temple is 50 Baht each. Spend the money! It’s stunning! Please click the link below to watch a slide show of the “White Temple” .

Slide show of the White Temple in Chiang Rai

After lunch in a local Thai restaurant (no air conditioning) eating outside by the road–but decent food, we headed to the bizarre Black House (Baan Dam).

I learned that in Thai, ‘baan’ means home or house and ‘dam’ means black. The Black House is actually a collection of about 40 buildings scattered around a large property. The buildings, art, and sculptures were created by Thailand artist Thawan Duchanee.

Thawan’s collection includes ancient Lanna-style wooden houses but in black, scattered throughout his park like grounds. 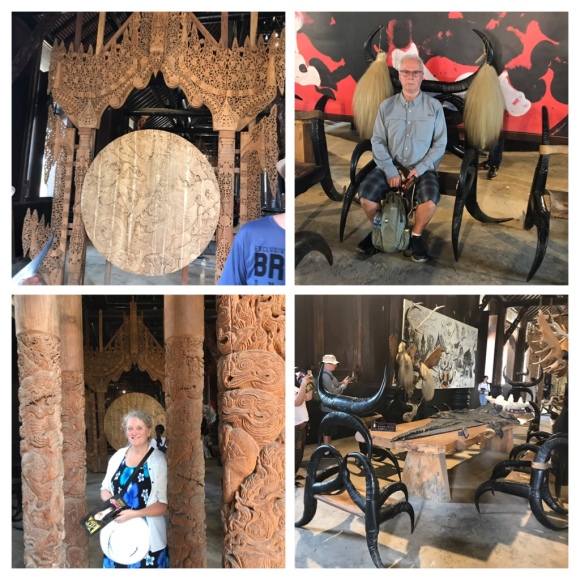 Many exhibits and displays include animal parts such as crocodile skins, buffalo and cow skulls and horns, elephant bones and tusks, and whale skeletons. 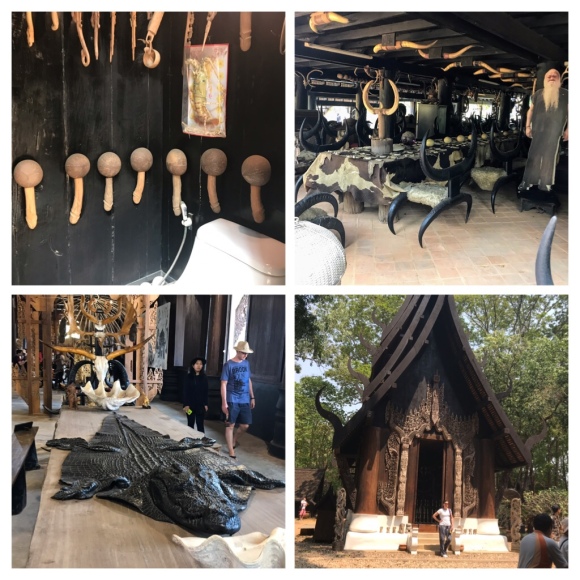 He also uses phallic symbols throughout his grounds–particularly near his many bathrooms/toilets.

Thawan has an interesting educational background.

He was born in 1939 in the province of Chiang Rai. Graduated with a B.A. from the Faculty of Painting and Sculpture, Silpakorn University and a MA in Mural Painting, Monument and Urban Planning. Then obtained a PhD. in Metaphysics and Aesthetics from Royal Academy of Visual Arts in Amsterdam, Netherlands.  He died in 2014.

Back on the bus heading to Wat Rong Seua Ten (The Blue Temple). 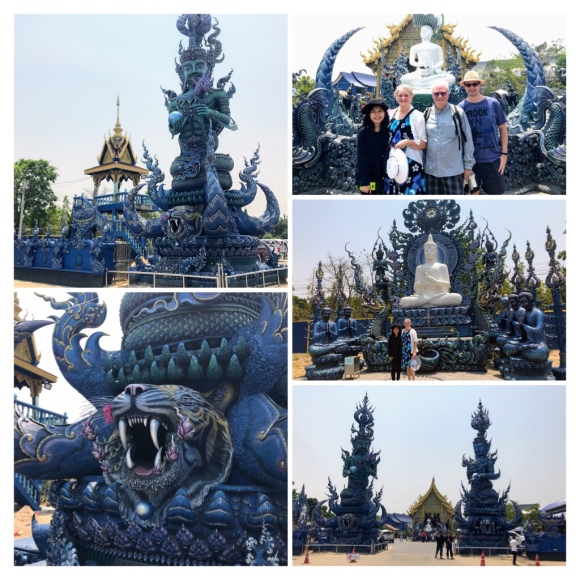 This is another uniquely individual temple in Chiang Rai  as it focuses on a blue theme embellished with gold.

Seua Ten in Thai translates to dancing tiger. We were informed that in the past, tigers roamed around the village and used to jump across the river.

Thankfully this isn’t a concern anymore! The Wat was beautiful as was the delicious blue coconut drink concoction many of us purchased at the nearby market.

It was time to return to Chiang Mai… Then we learned that although we did not wish to visit the Northern Thai hill tribe villages to see the Long Neck Karen people, others on our bus tour did.

We thought it was invasive and unethical to ‘gawk’ at another culture, but now we were heading there! The Kayan Long Neck tribes live in Northern Thailand as refugees. I had seen photos and read about their struggles in National Geographic years ago. The Long Neck Karen tribe is best known for the brass rings worn around the women’s necks giving them the appearance of a long neck.

Our guide informed us that the brass rings were originally put around the women’s necks as protection against Tiger attacks and to identify the women as part of this tribe so they married within the tribe (only 400 members of this tribe). We also learned that in reality the women’s necks do not get longer, their shoulders press lower due to the weight of the rings. I can only imagine the internal damage the neck rings cause!

We were also informed you could ask questions and the sale of their handmade crafts helped them to be self sufficient. As our tour bus pulled into the parking lot we had a moral dilemma to consider. We ended up deciding 1/2 of our group would stay in the 40 degree parking lot and wait until the bus continued home, the other 2 of us would go into the village and buy some crafts to support the Karen tribe’s economy.

We could see the straw roofs and small shacks of the village and the long thatched roofs of the market places as we walked down the hill. We paid the extra 30 Baht each to enter the market understanding that this money also went to support the refugees. I felt uncomfortable walking through the long marketplace. The scarves and homemade crafts were bright and beautifully made. In each stall a woman (and once a man) sat weaving.

The women seemed very serious–perhaps smiling was difficult with all the neck bands on! A few stalls had models of the neck rings for you to touch and lift. They were heavy! Some women spoke a tiny amount of basic English. Holding a conversation was not possible. I saw several elderly women working and a few young children playing.

Most of the women looked remarkably similar and possibly in their 20’s? I complimented many women on their beautiful talents and purchased scarves from 2 different artisans. After buying merchandise the women indicated for me to take their picture. I’m not sure if this is a usual procedure?

I left my visit with many questions wanting to learn more about the Karen Long Neck refugees of Northern Thailand.  This is a very informative source I discovered and you will notice the same women in the photos I took during my emotional visit.

Homeward Bound! This 12 hour tour was exhausting; but so packed with adventure, culture, and further questions to explore. Back to Chiang Mai. We have a day ‘Pampering Pachyderms’ to look forward to at Elephant Nature Park coming up!

Vancouver Island is my home base. Married to an amazing man named Mark. Curious. Life long learner. Love to travel, have adventures, try new things, enhance my global awareness. Live.Laugh.Love. So proud of my family.